It couldn’t be a better day for a BBQ competition. It is hot but not too hot, it is packed but not over crowded and the smell of BBQ filled the air. When most people in Los Angeles, California hear the words BBQ they think of summer, swim suits by the pool, and hot dogs and hamburgers over an open flame. That is not real BBQ, it is a myth created by television.

Real BBQ is cooking meat, poultry and occasionally fish with heat and the hot smoke of a fire, smoking wood, or hot coals of charcoal. Typically, to grill is to cook in this manner quickly, while barbecue is typically a much slower method utilizing less heat than grilling, attended to over an extended period of several hours.

Barbecue competitions are a whole other sport. Professional barbecue competitors will spend tens of thousands of dollars to build the perfect smoker in order to achieve that exemplary barbecue taste. They will spend countless hours smoking to enjoy a piece of meat that may take 5 minutes to eat. Spending that much time, money, and effort has got to be worth it.
I have always loved BBQ and came across the blog http://www.meatinc.blogspot.com/ and was introduced to Aaron Black.  A professional smoker with a passion to educated people on barbecuing for themselves. He invited me out to the Santa Anita BBQ Competition as a fellow meat lover how could I turn him down.
I headed out to Santa Anita Race track for the time of my life. Only heaven had 37 BBQ teams competing to be the best BBQ. When I arrived I expected to see a billow of smoke coming out of the middle of the track. That was not the case but the sweet smell of smoke hit my nose the second I got off the freeway.
I parked, got my ticked and headed into meat town. I skipped breakfast just for this day. I walked on to the BBQ grass field of meat battle for some of the greatest flavors my mouth had ever experienced. The second I met Aaron Black of Meat Inc. I had so many questions and here is what he had to say.
MEAT ME: Who judges these BBQ’s? What makes someone a certified BBQ judge?
Aaron Black: Typically the judges are certified BBQ judges; by the Kansas City Barbecue Society. They have to take classes. This particular event the judges are 100% CBJ qualified, 3 or 4 of them are first timers, which means they took their class not too long ago and this is their first event being a judge.
MEAT ME: How many judges are there?
Aaron Black: There is one judge for every team. So 37 teams, 37 judges; no judge will taste more than one of your meat types. So if you turn in chicken to judge one, he won’t try any of your brisket, pulled pork, or ribs. It will then go to another judge. A lot of people moan that if it is not 100 percent CBJ they will get bad scores because your loosing that consistency across the board from competition to competition. A lot of people complain that the judges don’t have more training; may be they get stuck in a rut and all of a sudden they don’t like anything spicy and they only prefer sweet. It is kind of a tricky thing. Some people cook to the judges and do a really good job; and some people cook what they like and they typically don’t win. Some people try to make a happy medium which is kind of where we are at.
MEAT ME: So how many different MEAT’s are cooked?
Aaron Black: There are 4 meats in every competition. You start out with chicken; then you go to pork ribs; then you go to pork butt; and then you go to brisket.
MEAT ME: So is brisket the only beef that they have?
Aaron Black: Yes.
MEAT ME: How many years have you guys been doing this?
Aaron Black: Since 2005.
MEAT ME: How many events do you guys do in a year?
Aaron Black: We do between 9 and 11 events a year. We’ll do as many events as my wife will let me do. That is basically the limitation.
MEAT ME: What kid of meats did you guys bring today?
Aaron Black: We brought all kinds of extra meat for people’s choice (the people get to vote for their favorite BBQ as well) we always bring extra chicken, cause people love chicken. We brought bratwurst cause that’s easy to cook and its relatively inexpensive. We also did pulled pork and we made brisket chili. We just came back from Lake Havasu where we won first place in chili and first place in people’s choice chili. So today we did the same chili we made there.
MEAT ME: How did you get into this?
Aaron Black: One of my buddies; his dad sold BBQ’s. So we bought up a bunch of BBQ’s and thought this was great. My friend said, “Hey my Dad’s gonna be in this BBQ competition!” and thought, “Hell yeah! We can do that too!”. So we went out cooked meat, played cards, drank a few beers, threw some meat in a box and had a great time. We only did 1-3 contest a year and now we take it a lot more seriously.
MEAT ME: How many of you guys are there?
Aaron Black: We have 4 core members but today we have 18 guys.
MEAT ME: How many people do you serve up at these events?
Aaron Black: Today we will server about 1,500, probably more.


MEAT ME: So what is your favorite MEAT?

Aaron Black: I really like chicken. A lot of these BBQ guys don’t like chicken because they have to cook it all the time. I love it. I cook chicken almost every weekend. 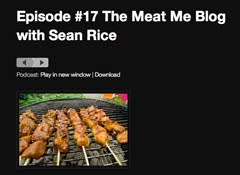 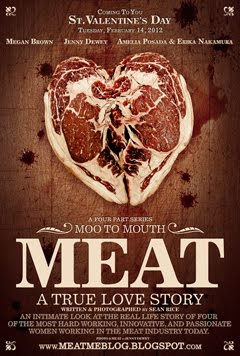 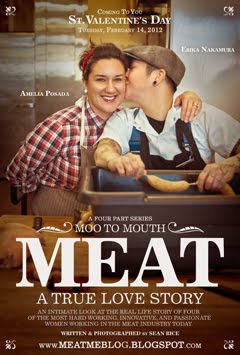 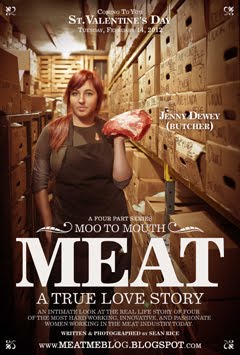 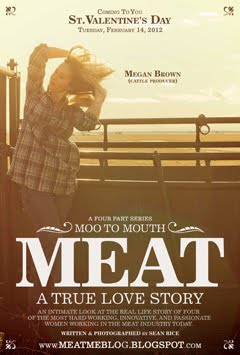